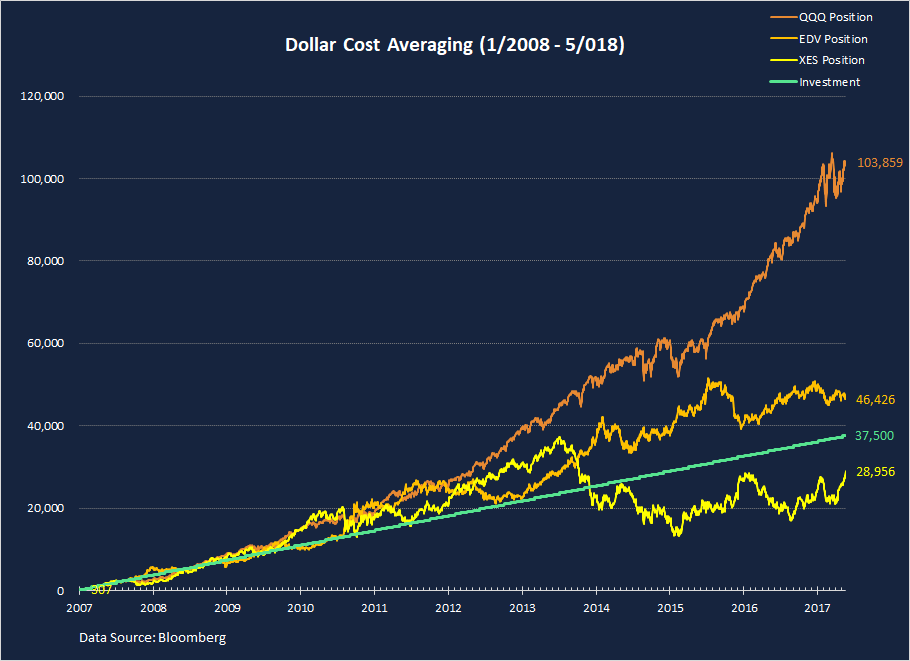 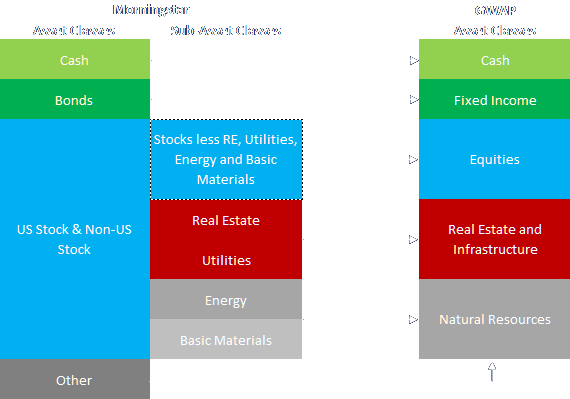 Dollar Cost Averaging (DCA) is an investment technique highlighted by Benjamin Graham in the “Intelligent Investor” and by Warren Buffett in his annual letters as a wise strategy for defensive investors.

It requires the investment of a fixed dollar amount on a regular basis (e.g. monthly) at the price prevailing at the time. In other words, this technique does not require timing the market (i.e. trying to buy low and sell high), but rather requires the discipline of buying regularly through “thick and thin”.

GWAP (www.gwapfinancial.com) supports DCA through its seamless Rebalancing functionality that redeploys regular cash investments and dividends across an entire portfolio according to a predefined asset allocation strategy.

We decided to put this strategy to the test with 3 ETFs on the GWAP platform: 2 outperformers in their asset classes and 1 underperformer over the past 10 years:

Summary of the Backtest Results

The DCA strategy would have resulted in significant gains and low average cost base for the outperformers QQQ and EDV. However, it could not protect against sustained losses on XES.

The chart below shows QQQ’s share price performance from 31 Dec 2007 until 17 May 2018, its rolling average price and the DCA rolling cost/ share. 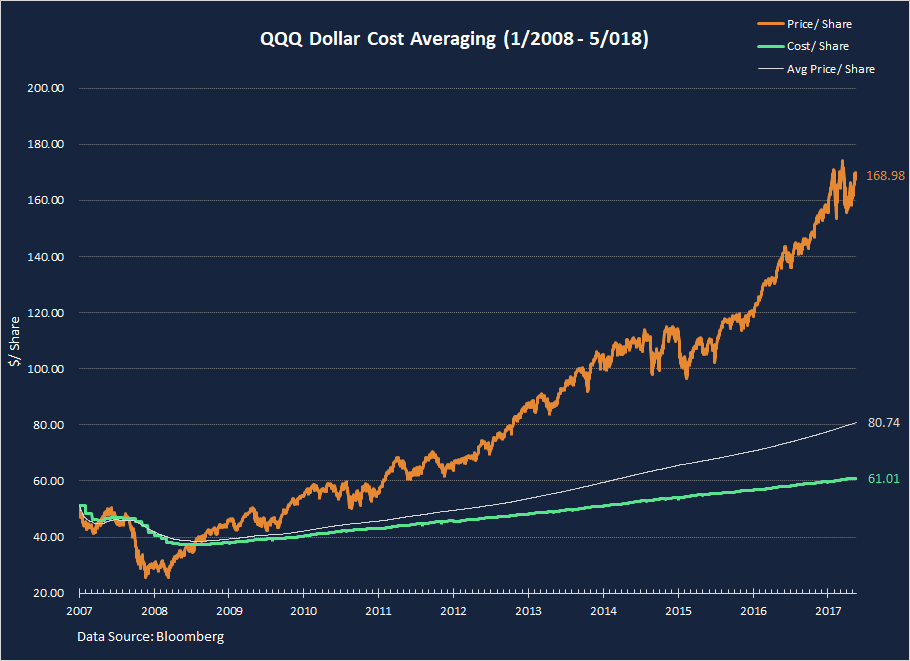 By then DCA would have accumulated shares at $43.96/ share, so the position would have experienced an unrealized mark to market loss of almost 42%. Still better than a 50% loss compared to a bullet investment, but nevertheless not easy to stomach.

From Oct/ Nov 2008 equity markets continued to struggle, retested its lows in Mar 2009 and QQQ hit $25.74/ share on 9 Mar 2009. By then, DCA investors would have added to their initial position at much lower prices and would have decreased their cost base from $51.22/ share to $38.18/ share. However this would have still been a painful 33% loss compared to the prevailing prices at the time.

Finally, aggressive Fed and government interventions stabilized large banks and markets started to recover. DCA strategy would have turned positive by July 2009 and would have never showed a loss again through May 2018.

The shares purchased during the Great Recession would have helped reduce the average acquisition price of QQQ at $61.01/ share, compared to $168.98/ share (corresponding to Nasdaq 100 at 6902) at the end of the period.

For EDV the story is almost the exact opposite: it generally rallied when equities sold off and plummeted when equities rebounded. As a bond tracking ETF, EDV has a negative correlation with QQQ over the past 10 years, or -0.38 as calculated by GWAP. 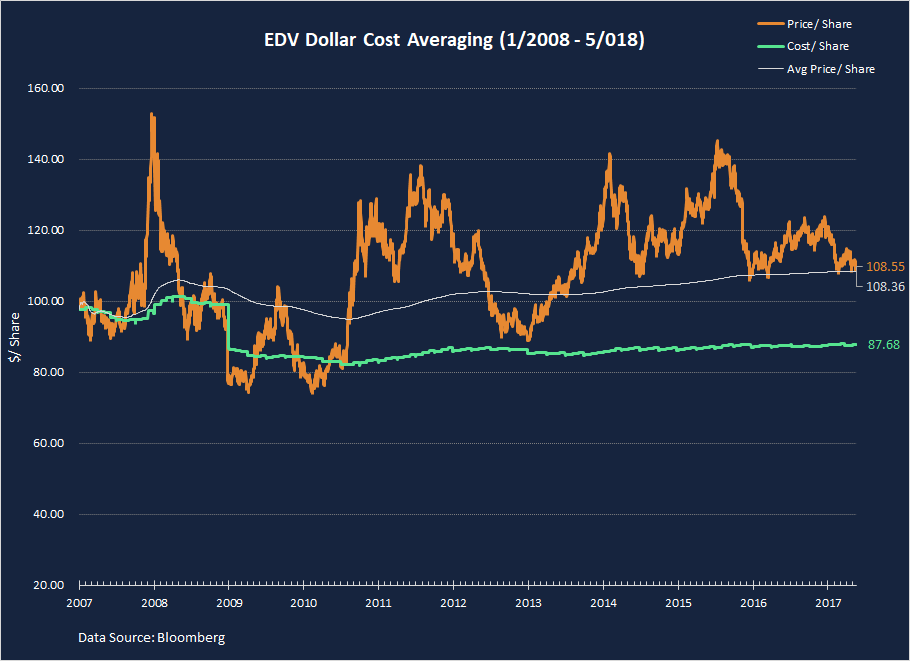 EDV started the backtest at $97.71/ share. It then reached an all time high of $152.87/ share by 18 December 2008, as long term interest rates plummeted due to risk aversion and fears of a new Great Depression.

By then, DCA strategy would have accumulated shares at $97.30/ share and was showing an unrealized gain of 57%. Not bad in an environment where many were suffering huge losses.

However, by end of 2009, as the economic environment started to stabilize, long term interest rates reverted higher and the EDV price plunged below the DCA average. At the end of December 2009, EDV made a large special distribution (return of capital) of $11.08/ share which we modeled as re-invested in EDV. This substantially decreased the break even cost of the position, but also had a negative impact on the market price.

All, in all, unlike QQQ which followed an uptrend since 2009, EDV continued to fluctuate around an average price of $100/ share to $108/ share, with spikes during the Greek/ Eurozone crises and declines during the periods of relative stability.

As a result it took until July 2011 (second Greek bailout and fear of global contagion), for EDV to firmly break above the DCA average.

However, eventually the Fed restarted policy rate hikes, as well as reversing the QE as of end of 2017. Recently inflation started picking up as well. The combined impact of these factors has been an increase in long term yields to over 3.2% (30 years) and corresponding decline in EDV price, currently at $108.55/ share, compared to the DCA average of $87.68/ share.

XES tracks the index of oil equipment and servicing companies whose economic performance and valuations depend heavily on the oil price.

Eventually, as the global economy emerged from the recession, oil prices rebounded above $100/bbl by spring 2011 and the DCA strategy was again firmly in profit territory.

Crude continued to hover around $85 to $105/bbl for the following 4 years, which supported XES.

However, as of mid-2014 oil prices started to plummet again, this time due to higher supply from the US shale, rather than from weak global demand. XES crossed its DCA line to the downside on 28 Nov 2014 and hasn’t recovered in positive territory since. Nevertheless, the DCA strategy would have continued to accumulate cheaper shares and would have decreased the average cost to $24.74/ share, almost 40% below the starting point in December 2007, but still 30% above current market price.

However recent oil price increases due to OPEC supply cuts and higher geopolitical risk (e.g. restart of Iran sanctions) are likely to have a positive impact on XES going forward.

Although information in this document has been obtained from sources believed to be reliable, GWAP Financial and its affiliates do not guarantee its accuracy or completeness and accept no liability for any direct or consequential losses arising from its use.

Opinions expressed herein are not intended to be a forecast of future events, a guarantee of future results or investment advice, and are subject to change based on market and other conditions. In any case, past performance is no guarantee of future results, and future results may not meet our expectations due to a variety of economic, market and other factors. Further, any projections of potential risk or return are illustrative and should not be taken as limitations of the maximum possible loss or gain.

The information contained herein is not intended to be an exhaustive discussion of the strategies or concepts mentioned herein or tax or legal advice. GWAP Financial assumes that, before making any commitment to invest, the investor has taken whatever tax, legal or other advice the investor considers necessary and that the investor has arranged to account for any tax lawfully due on the income or gains arising from any investment product provided by GWAP. GWAP can accept no responsibility for the tax treatment of any investment.